Seventeen of the twenty highest peaks in the United States are in Alaska. Alaska has about 100,000 glaciers of all sizes which cover five percent of the state. The discovery of gold is what brought thousands of people to Alaska.

Included below are more facts and symbols, a state map, the state song and views of the Alaska State Quarter.

State Motto - North to the Future

State Mammal - The Moose and the Bowhead Whale

Eight stars of gold on a field of blue,
Alaska's flag, may it mean to you,
The blue of the sea, the evening sky,
The mountain lakes and the flowers nearby,
The gold of the early sourdough's dreams,
The precious gold of the hills and streams,
The brilliant stars in the northern sky,
The "Bear," the "Dipper," and shining high,
The great North Star with its steady light,
O'er land and sea a beacon bright,
Alaska's flag to Alaskans dear,
The simple flag of a last frontier. 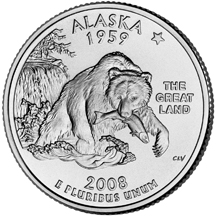