Arkansas became the 25th state in 1836 and is the 33rd largest state by population with about 3 million residents. It is also the 27th largest state by land and water area with a total area of 53,179 square miles. The largest city in Arkansas is Little Rock, also the capital city, with a population of approximately 190,000 people.

The first permanent white settlement in Arkansas was the "Arkansas Post" established by the French. The area was first ruled by France, then by Spain, then again by France before being purchased by the United States. Under American control, Arkansas was part of the Louisiana Territory and then the Missouri Territory before becoming its own separate territory.

Included below are more facts and symbols, a state map, the state song and views of the Arkansas State Quarter.

1) Arkansas (You Run Deep in Me)
By Wayland Holyfield 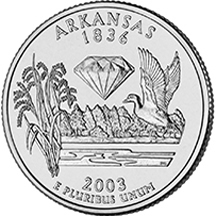