The name Connecticut came from the word "Quinnehtukqut" which is Mohegan for "Long River Place" or "Beside the Long Tidal River."

Included below are more facts and symbols, a state map, the state song and views of the Connecticut State Quarter.

Yankee Doodle went to town,
Riding on a pony,
Stuck a feather in his hat,
And called it macaroni. 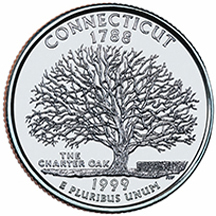