Delaware, established in 1787 and sometimes referred to as the "State That Started a Nation," was the first state of the United States and was also the first to ratify the US Constitution.

Included below are more facts and symbols, a state map, the state song and views of the Delaware State Quarter.

Oh the hills of dear New Castle,
and the smiling vales between,
When the corn is all in tassel,
And the meadowlands are green;

Where the cattle crop the clover,
And its breath is in the air,
While the sun is shining over
Our beloved Delaware.

Where the wheat fields break and billow,
In the peaceful land of Kent,
Where the toiler seeks his pillow,
With the blessings of content;

Where the bloom that tints the peaches,
Cheeks of merry maidens share,
And the woodland chorus preaches
A rejoiceing Delaware.

Dear old Sussex visions linger,
Of the holly and the pine,
Of Henlopens Jeweled finger,
Flashing out across the brine;

Of the gardens and the hedges,
And the welcome waiting there,
For the loyal son that pledges
Faith to good old Delaware.

From New Castle's rolling meadows,
Through the fair rich fields of Kent,
To the Sussex shores hear echoes,
Of the pledge we now present;

Liberty and Independence,
We will guard with loyal care,
And hold fast to freedom's presence,
In our home state Delaware. 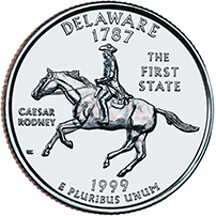