Georgia became the 4th state in 1788 and is the 8th largest state by population with about 10.5 million residents. It is also the 21st largest state by land and water area with a total area of 59,425 square miles. Georgia's capital city is Atlanta, which is the nation's 33rd largest city with a population of approximately 540,000 people.

Georgia was the last of the original 13 colonies to be founded. The Georgia colony was founded by James Edward Oglethorpe, a member of the British Parliament before coming to America. In establishing the Georgia colony, he was trying to find a better way to deal with England's "worthy poor" instead of them being jailed for their indebtedness.

Included below are more facts and symbols, a state map, the state song and views of the Georgia State Quarter.

Georgia On My Mind
The words were written by Stuart Gorrell.
The music was composed by Hoagy Carmichael.

Georgia, Georgia,
The whole day through
Just an old sweet song
Keeps Georgia on my mind

I said Georgia,
Ooh Georgia, no peace I find
Just an old sweet song
Keeps Georgia on my mind

Georgia,
Georgia,
No peace, no peace I find
Just this old, sweet song
Keeps Georgia on my mind

I said just an old sweet song,
Keeps Georgia on my mind 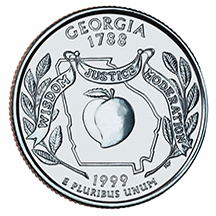