Hawaii became the 50th state in 1959 and is the 40th largest state by population with about 1.4 million residents. It is also the 47th largest state by land and water area with a total area of 10,931 square miles. Honolulu, the state capital, is Hawaii's largest city with a population of approximately 375,000 people.

Hawaii is comprised of eight major islands. They are as follows (from smallest to largest): Kahoolawe, Niihau, Lanai, Molokai, Kauai, Oahu, Maui and the Big Island of Hawaii.

Included below are more facts and symbols, a state map, the state song and views of the Hawaii State Quarter.

Translation:
Hawaii's own true sons, be loyal to your chief
Your country's liege and lord, the Alii(1).
Father above us all, Kamehameha(2),
Who guarded in the war with his ihe(3). 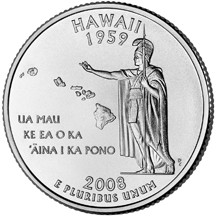