Idaho became the 43rd state in 1890 and is the 39th largest state by population with about 1.7 million residents. It is also the 11th largest state by land and water area with a total area of 83,557 square miles. Boise, the state capital city, is Idaho's largest city with a population of approximately 205,000 people.

Idaho was the name of a steamship which traveled the Columbia River. When gold was discovered on the Clearwater River, the mines were referred to as the Idaho Mines.

Included below are more facts and symbols, a state map, the state song and views of the Idaho State Quarter.

Here We Have Idaho
Verses by Albert J.Tompkins
Chorus by McKinley Helm
Music by Sallie Hume-Douglas
Arranged by Craig Chernos

You’ve heard of the wonders our land does possess,
Its beautiful valleys and hills.
The majestic forests where nature abounds,
We love every nook and rill

And here we have Idaho,
Winning her way to fame.
Silver and gold in the sunlight blaze,
And romance lies in her name.

There’s truly one state in this great land of ours,
Where ideals can be realized.
The pioneers made it so for you and me,
A legacy we’ll always prize.

And here we have Idaho,
Winning her way to fame.
Silver and gold in the sunlight blaze,
And romance lies in her name. 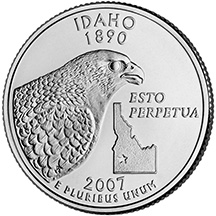