Illinois became the 21st state in 1818 and is the 6th largest state by population with almost 13 million residents. It is also the 24th largest state by land and water area with a total area of 57,914 square miles. Illinois is home to Chicago, which is the nation's third largest city with a population of approximately 2.8 million people.

Included below are more facts and symbols, a state map, the state song and views of the Illinois State Quarter.

Illinois
The words were written by C.H. Chamberlain.
The music was composed by Archibald Johnston. 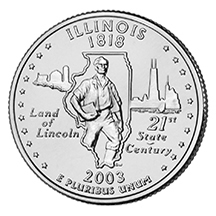