Indiana became the 19th state in 1816 and is the 17th largest state by population with about 6.7 million residents. It is also the 38th largest state by land and water area with a total area of 36,418 square miles. Indianapolis, which is the capital of Indiana, is the nation's 14th largest city with a population of approximately 800,000 people.

Included below are more facts and symbols, a state map, the state song and views of the Indiana State Quarter.

State Motto - "The Crossroads of America"

On the Banks of the Wabash, Far Away
words and music by Paul Dresser

'Round my Indiana homestead wave the cornfields,
In the distance loom the woodlands clear and cool,
Oftentimes my tho'ts revert to scenes of childhood,
Where I first received my lessons - nature's school.
But one thing there is missing in the picture,
Without her face it seems so incomplete,
I long to see my mother in the doorway,
As she stood there years ago, her boy to greet.

Oh, the moonlight's fair tonight along the Wabash,
From the fields there comes the breath of new-mown hay,
Through the sycamores the candle lights are gleaming,
On the banks of the Wabash, far away.
Many years have passed since I strolled by the river,
Arm in arm, with sweetheart Mary by my side,
It was there I tried to tell her that I loved her,
It was there I begged of her to be my bride.
Long years have passed since I strolled thro' the churchyard.
She's sleeping there, my angel, Mary dear,
I loved her, but she thought I didn't mean it,
Still I'd give my future were she only here. 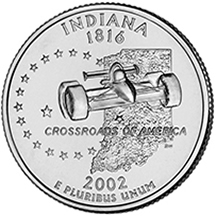