Iowa became the 29th state in 1846 and is the 30th largest state by population with about 3.1 million residents. It is also the 23rd largest state by land and water area with a total area of 56,272 square miles. Des Moines, the state capital city, is Iowa's largest city with a population of approximately 200,000 people.

Iowa was included in the Louisiana Purchase. The name Iowa came from the American Indian word "Iowa."

Included below are more facts and symbols, a state map and views of the Iowa State Quarter.

State Motto - "Our liberties we prize, and our rights we will maintain" 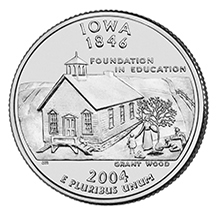