Kentucky became the 15th state in 1792 and is the 26th largest state by population with about 4.4 million residents. It is also the 36th largest state by land and water area with a total area of 40,409 square miles. Kentucky is home to Louisville, which is the nation's 30th largest city with a population of approximately 557,000 people.

The name Kentucky is of Native American origin and originally referred to the Kentucky River. The name has been associated with more than one language producing several meanings which include "land of tomorrow", "cane and turkey lands" and "meadow lands."

Kentucky is one of four states which consider themselves to be a Commonwealth. The other three are Massachusetts, Pennsylvania and Virginia. A State and a Commonwealth are considered to be the same and equal in regards to their status in the United States of America.

Included below are more facts and symbols, a state map, the state song and views of the Kentucky State Quarter. 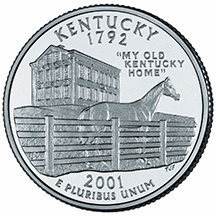