Louisiana became the 18th state in 1812 and is the 25th largest state by population with about 4.6 million residents. It is also the 33rd largest state by land and water area with a total area of 51,840 square miles. Louisiana is home to New Orleans, which is the state's largest city with a population of over 300,000 people. The first Mardi Gras parade in New Orleans was in 1838.

The Battle of New Orleans was fought in 1815. Andrew Jackson's troups were outnumbered by a 2 to 1 ratio, yet they defeated the British for control of the lower Mississippi. Louisiana's first governor was William Charles Cole Claiborne.

Included below are more facts and symbols, a state map, the state songs and views of the Louisiana State Quarter.

"Give Me Louisiana" and "You Are My Sunshine"

"I pledge allegiance to the flag of the state of Louisiana
and to the motto for which it stands:
A state, under God, united in purpose and ideals,
confident that justice shall prevail for all of those abiding here." 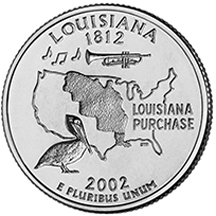