Massachusetts was one of the original 13 states. It was originally home to Algonquian Indians with the state's name coming from an indian community called Massachusett.

Massachusetts is one of four states which consider themselves to be a Commonwealth. The other three are Kentucky, Pennsylvania and Virginia. A State and a Commonwealth are considered to be the same and equal in regards to their status in the United States of America.

Included below are more facts and symbols, a state map, the state song and views of the Massachusetts State Quarter.

State Motto - "Ense Petit Placidam Sub Libertate Quietem"
(By the Sword We Seek Peace, But Peace Only Under Liberty)

"All Hail to Massachusetts"

CHORUS
You can tell me about the times you spent
In the Rockies and on the plains,
Please don't think that I'm the last to say
That there ain't lots of other places
In this world that still remain
Beautiful and unchanged
But they're just not the same
The sun comes up to meet the dawn
And there's a day that must go on
There's another night that's gone
In Massachusetts
And I could spend all of my days
And remain each day amazed
At the way each day is phrased
In Massachusetts 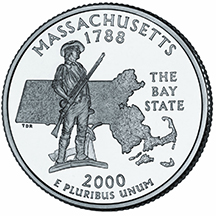