Michigan became the 26th state in 1837 and is the 10th largest state by population with almost 10 million residents. It is also the 22nd largest state by land and water area with a total area of 96,716 square miles. Michigan is home to Detroit, which is the nation's 11th largest city with a population of approximately 900,000 people.

Included below are more facts and symbols, a state map, the state songs and views of the Michigan State Quarter.

State Motto - "Si Quaeris Peninsulam Amoenam Circumspice"
(If you seek a pleasant peninsula, look about you.) 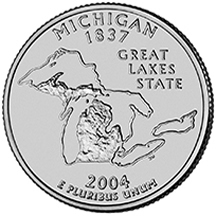