The name Missouri originates with a tribe of Sioux Indians known as the Missouris whose name has been mistranslated as meaning "muddy water." While officials at the Smithsonian Institution have declared its meaning as "town of the large canoes," other officials have translated the Indian syllables within the word to mean "wooden canoe people" or "he of the big canoe."

Included below are more facts and symbols, a state map, the state song and views of the Missouri State Quarter.

Hush-a-bye, ma baby, slumbertime is comin' soon;
Rest yo' head upon my breast while Mommy hums a tune;
The sandman is callin' where shadows are fallin',
While the soft breezes sigh as in days long gone by.

Way down in Missouri where I heard this melody,
When I was a little child upon my Mommy's knee;
The old folks were hummin'; their banjos were strummin';
So sweet and low.

Hear that mournful melody,
It just haunts you the whole day long,
And you wander in dreams back to Dixie, it seems,
When you hear that old time song.

Hush-a-bye ma baby, go to sleep on Mommy's knee,
Journey back to Dixieland in dreams again with me;
It seems like your Mommy is there once again,
And the old folks were strummin' that same old refrain.

Way down in Missouri where I learned this lullaby,
When the stars were blinkin' and the moon was climbin' high,
Seems I hear voices low, as in days long ago,
Singin' hush-a-bye. 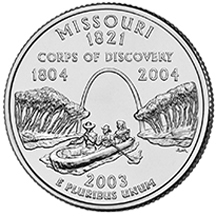