Montana became the 41st state in 1889 and is the 43rd largest state by population with about 1 million residents. It is also the 4th largest state by land and water area with a total area of 147,042 square miles. Montana is home to Billings, which is the state's largest city with a population of approximately 100,000 people.

The name Montana came from a Spanish word meaning "mountainous."

Included below are more facts and symbols, a state map, the state song and views of the Montana State Quarter.

Tell me of that Treasure State
Story always new,
Tell of its beauties grand
And its hearts so true.
Mountains of sunset fire
The land I love the best
Let me grasp the hand of one
From out the golden West

Each country has its flow'r;
Each one plays a part,
Each bloom brings a longing hope
To some lonely heart.
Bitterroot to me is dear
Growing in my land
Sing then that glorious air
The one I understand. 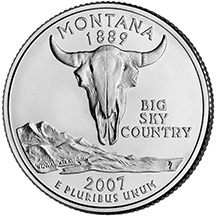