Nebraska became the 37th state in 1867 and is the 37th largest state by population with about 1.9 million residents. It is also the 15th largest state by land and water area with a total area of 77,354 square miles. Nebraska is home to Omaha, which is the largest city in the state with a population of approximately 430,000, and the state's capital city, Lincoln, with about 250,000 people.

Included below are more facts and symbols, a state map, the state song and views of the Nebraska State Quarter.

State Nickname - The Cornhusker State and the Tree Planters' State

State Motto - "Equality Before the Law"

A Place Like Nebraska
Words and music composed by Sol Kutler

A Place Like Nebraska
When I dream of my home
And the good folks I’ve known
I’m glad I’ve grown up
In Nebraska
‘Cause the good life is there
With sun and fresh air
And neighbors who care
In Nebraska
Wherever you go, they all want to know
And someday someone will ask ya
So turn on your smile
Tell them life is worthwhile
When you’re bred and corn-fed in Nebraska
With cool winding streams
And good football teams
And jobs that are there for the asking 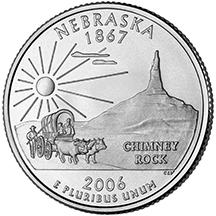