Nevada became the 36th state in 1864 and is the 32nd largest state by population with about 3 million residents. It is also the 7th largest state by land and water area with a total area of 110,561 square miles. Nevada is home to Las Vegas, which is the state's largest city with a population of approximately 550,000 people.

Included below are more facts and symbols, a state map, the state song and views of the Nevada State Quarter. 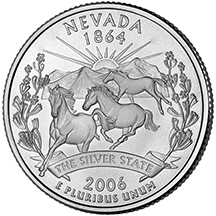