Included below are more facts and symbols, a state map, the state song and views of the New Hampshire State Quarter.

State Nickname - New Hampshire has four nicknames:
(The Granite State, the Mother of Rivers,
the White Mountain State and the Switzerland of America)

Old New Hampshire
The words were written by Dr. John F. Holmes.
The music was composed by Maurice Hoffmann.

With a skill that knows no measure,
From the golden store of Fate
God, in His great love and wisdom,
Made the rugged Granite State;
Made the lakes, the fields, the forests;
Made the Rivers and the rills;
Made the bubbling, crystal fountains
Of New Hampshire’s Granite Hills

Builded he New Hampshire glorious
From the borders to the sea;
And with matchless charm and splendor
Blessed her for eternity.
Hers, the majesty of mountain;
Hers, the grandeur of the lake;
Hers, the truth as from the hillside
Whence her crystal waters break

"Autumn in New Hampshire"
Words and music by Leo Austin.

"The Old Man of the Mountain"
Words and music by Paul Belanger. 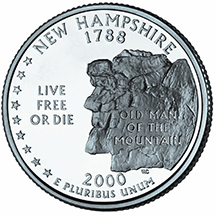