New Jersey was officially named after the Isle of Jersey in the English Channel.

Included below are more facts and symbols, a state map and views of the New Jersey State Quarter. 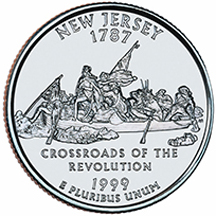