New Mexico became the 47th state in 1912 and is the 36th largest state by population with about 2 million residents. It is also the 5th largest state by land and water area with a total area of 121,589 square miles. New Mexico is home to Albuquerque, which is the state's largest city with a population of approximately 520,000 people.

When New Mexico was first designated as a territory in 1850, it included parts of Colorado, Utah, Nevada and all of what is now known as Arizona.

Included below are more facts and symbols, a state map, the state poem and views of the New Mexico State Quarter.

State Nickname - The Land of Enchantment

State Slogan - "Everybody is Somebody in New Mexico"

State Motto - "Crescit Eundo" (it grows as it goes)

Lift, New Mexico,
your tired forehead
That clouds the enchantment
of your peaceful face,
And joyfully receive
the bright crown,
Symbol of glory, venture,
and peace.

After so many years of
fight and persistence
Your luck has changed
and you gain victory,
Reaching up to see your
fortunate day at last
That is an overflow of
happiness and the fountain
of your glory.

You have been a great
empire filled with riches,
And many mishaps you
had to suffer,
But now complete triumph
reach up to your integrity,
and reward for your constancy,
you were able to achieve.

Your people for three
centuries, isolated and lonely,
With help or protection
from nobody,
They fought for their
existence, reckless and daring,

Sealing with their blood
their dominion and possession.
After such heroic effort
finally you deserve
The goodness with such
an insistence you procure,
To be admitted in the state
of the union
With the sovereignty that
is a free man’s enchantment. 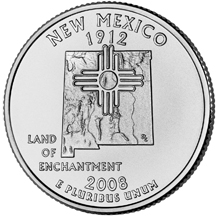