New York became the 11th state in 1788 and is the 4th largest state by population with about 19.8 million residents. It is also the 30th largest state by land and water area with a total area of 54,556 square miles. New York is home to the city, New York, which is the nation's largest city with a population of over 8 million people.

New York was named after the Duke of York and was one of the original 13 states. It also was the location of our nation's first capital, New York City where George Washington was inaugurated in 1789.

Included below are more facts and symbols, a state map, the state song and views of the New York State Quarter.

I Love New York
Words and music by Steve Karmen 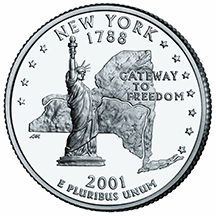