The name Dakota is a Sioux Indian word meaning "friend."

Included below are more facts and symbols, a state map, the state song and views of the North Dakota State Quarter.

State Motto - "Liberty and Union Now and Forever, One and Inseparable"

North Dakota Hymn
The words were written by James W. Foley.
The music was composed by Dr. C.S. Putnam. 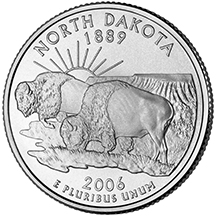