Ohio became the 17th state in 1803 and is the 7th largest state by population with about 11.7 million residents. It is also the 35th largest state by land and water area with a total area of 44,825 square miles. Columbus, the state's capital city, is the largest city in Ohio with a population of approximately 750,000 people.

The name Ohio is from the Seneca Indian word "ohi-yo" meaning "beautiful river" or "large creek."

Included below are more facts and symbols, a state map, the state song and views of the Ohio State Quarter.

State Motto - "With God All Things Are Possible"

State Rock Song - "Hang On Sloopy"
(Recorded by the McCoys, a band from Dayton, Ohio)

I sailed away; Wandered afar;
Crossed the mighty restless sea;
Looked for where I ought to be.
Cities so grand, mountains above,
Led to this land I love.

CHORUS:
Beautiful Ohio, where the golden grain
Dwarf the lovely flowers in the summer rain.
Cities rising high, silhouette the sky.
Freedom is supreme in this majestic land;
Mighty factories seem to hum in tune, so grand.
Beautiful Ohio, thy wonders are in view,
Land where my dreams all come true! 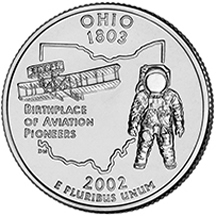