Oklahoma became the 46th state in 1907 and is the 28th largest state by population with about 3.9 million residents. It is also the 19th largest state by land and water area with a total area of 69,898 square miles. Oklahoma City, the state's capital city, is Oklahoma's largest city with a population of approximately 550,000 people.

The name Oklahoma is derived from two Choctaw words. The first is "okla" which is understood to mean people and "human" which means red. Currently, 252,420 American Indians reside in the state, many of who belong to one of the thirty-nine tribes headquartered in Oklahoma.

Included below are more facts and symbols, a state map, the state song and views of the Oklahoma State Quarter.

Do You Realize?
By the Flaming Lips

Well, here goes some scribblin' that's a little past due,
But I reckon I'm always a-thinkin' 'bout you.
I've been readin' the papers in my own little way,
And I see where you messed up my last birthday.
Through divine television I caught the dedication
And heard some tributes by a mighty swell nation.
Now that's a powerful nice shack you built on the hill;
But that's just like the Sooners, it gives them a thrill.
I never did nuthin' to cause all that fuss;
And sometimes, folks, I could almost cuss.
But, dern you, I love you, I guess it's my pride
That chokes me all up and hurts me inside.
I heard Jesse, Irvin, Cohan and Fred
And Amon and Eddie, what nice things they said.
I always called Claremore a big little town,
With guys like Mort Harrison and others around.
I see where Joe Crosson winged there for a day;
Remember him, Wiley? We slept all the way.
But I'll tell you the part which touched me the most,
And it ain't like me to speak up and boast.
It was when dear Mary pulled the curtain string
For my act in bronze -- what a homely thing!
But I guess it was sentiment that filled the place,
'Cause my kids kind of cried and I saw Betty's face.
God bless my old partner, she held up her head;
and though none of you heard me, she knew what I said.
And I spied Sister Sally with a shy little glance;
She's all the West means, charm and romance.
Old Jo had a job a-chisslin' my mug;
Why, I got more wrinkles than a Navajo rug.
So you're honorin' Oklahoma with a replica of me --
Move over Sequoyah, for another Cherokee.
Well, much obliged friends, for the money you spent,
And the words that were spoken by our President.
I wish you had erected a memorial to peace;
We'd be happy up here if war talk would cease.
But I ain't ungrateful, I just can't see
Such a hullabaloo 'bout a cowboy like me.
Well, so long folks, it's time to retire;
I got to keep a date with Odd McIntyre. 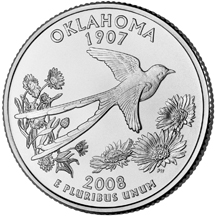