Oregon became the 33rd state in 1859 and is the 27th largest state by population with about 4.2 million residents. It is also the 10th largest state by land and water area with a total area of 98,381 square miles. Oregon is home to Portland, which is the state's largest city with a population of approximately 550,000 people.

The origin of the name Oregon is unknown, however some say the name came from the French word "ouragan" meaning "hurricane."

Included below are more facts and symbols, a state map, the state song and views of the Oregon State Quarter.

State Motto - "She Flies With Her Own Wings" 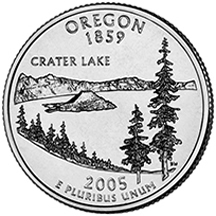