King Charles II owed William Penn money which Admiral Penn had lent him. Seeking a haven in the New World for persecuted Friends, Penn asked the King to grant him land in the territory between Lord Baltimore’s province of Maryland and the Duke of York’s province of New York. With the Duke’s support, Penn’s petition was granted. The King signed the Charter of Pennsylvania on March 4, 1681, and it was officially proclaimed on April 2. The King named the new colony in honor of William Penn’s father.

Pennsylvania is one of four states which consider themselves to be a Commonwealth. The other three are Massachusetts, Kentucky and Virginia. A State and a Commonwealth are considered to be the same and equal in regards to their status in the United States of America.

Included below are more facts and symbols, a state map, the state song and views of the Montana State Quarter.

Verse 1
Pennsylvania, Pennsylvania,
Mighty is your name,
Steeped in glory and tradition,
Object of acclaim.
Where brave men fought the foe of freedom,
Tyranny decried,
'Til the bell of independence
filled the countryside.

Chorus
Pennsylvania, Pennsylvania,
May your future be,
filled with honor everlasting
as your history.

Verse 2
Pennsylvania, Pennsylvania,
Blessed by God's own hand,
Birthplace of a mighty nation,
Keystone of the land.
Where first our country's flag unfolded,
Freedom to proclaim,
May the voices of tomorrow
glorify your name.

Chorus
Pennsylvania, Pennsylvania,
May your future be,
filled with honor everlasting
as your history. 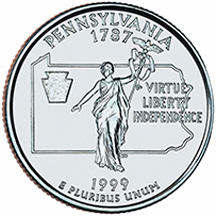