The name Dakota is a Sioux Indian word meaning "friend." The discovery of gold in the Black Hills in 1874 caused a rush of miners, prospectors and fortune seekers to that area. The arrival of the railroad also helped to speed up settlement in Dakota Territory. In 1878, the rush for land known as the "Great Dakota Boom" began.

Included below are more facts and symbols, a state map, the state song and views of the South Dakota State Quarter.

Hail! South Dakota, A great state of the land,
Health, wealth and beauty, That's what makes her grand;
She has her Black Hills, And mines with gold so rare,
And with her scenery, No other state can compare.

Come where the sun shines, And where life's worth your while,
You won't be here long, 'Till you'll wear a smile;
No state's so healthy, And no folk quite so true,
To South Dakota. We welcome you.

Hail! South Dakota, The state we love the best,
Land of our fathers, Builders of the west;
Home of the Badlands, and Rushmore's ageless shrine,
Black Hills and prairies, Farmland and Sunshine.
Hills, farms and prairies, Blessed with bright Sunshine.

"I pledge loyalty and support to the flag and state of South Dakota, land of sunshine, land of infinite variety."

(The pledge to the flag and to the state may not preempt,
replace or be recited before the pledge of allegiance to the flag of the United States.) 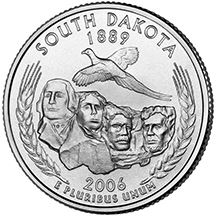