The name Tennessee came from the Indian word "Tanasi," which was the name of a Cherokee town.

Included below are more facts and symbols, a state map, the state songs and views of the Tennessee State Quarter.

State Slogan - "Tennessee-America at its Best"

State Insects - The Firefly and the Ladybug

(There are seven official state songs for Tennessee)

#1) My Homeland, Tennessee
The words were written by Nell Grayson Taylor.
The music was composed by Roy Lamont Smith.

#3) My Tennessee
by Frances Hannah Tranum

#7) The Pride of Tennessee
by Fred Congdon, Thomas Vaughn and Carol Elliot 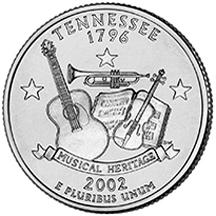