Vermont became the 14th state in 1791 and is the 49th largest state by population with about 620,000 residents. It is also the 43rd largest state by land and water area with a total area of 9,614 square miles.

The name Vermont orignates from a French phrase, "les monts verts" which is translated as "the green mountains" which French explorer, Samuel de Champlain, is credited as discovering in the 1600's.

Included below are more facts and symbols, a state map, the state song and views of the Vermont State Quarter. 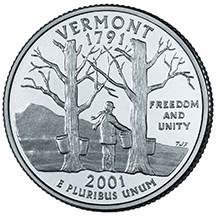