Virginia became the 10th state in 1788 and is the 12th largest state by population with about 8.5 million residents. It is also the 37th largest state by land and water area with a total area of 42,774 square miles. Virginia Beach is the largest city in Virginia with a population of approximately 433,000 people.

The state of Virginia, often referred to as the Mother of Presidents, has the distinction of being the birthplace of more U.S. presidents than any other state. Eight U.S. presidents, including four of the first five, were born in Virginia: George Washington, Thomas Jefferson, James Madison, James Monroe, William Henry Harrison, John Tyler, Zachary Talor, and Woodrow Wilson.

Virginia is one of four states which consider themselves to be a Commonwealth. The other three are Massachusetts, Kentucky and Pennsylvania. A State and a Commonwealth are considered to be the same and equal in regards to their status in the United States of America.

Included below are more facts and symbols, a state map and views of the Virginia State Quarter.

State Slogan - "Virginia is for Lovers" 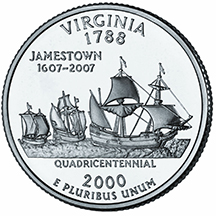