Washington became the 42nd state in 1889 and is the 13th largest state by population with about 7.5 million residents. It is also the 20th largest state by land and water area with a total area of 71,300 square miles. Washington is home to Seattle, which is the state's largest city with a population of approximately 598,000 people.

Washington is the only one of the fifty states to be named for a president and is home to Mount St. Helens, an active volcanoe which erupted in 1980.

Included below are more facts and symbols, a state map, the state song and views of the Washington State Quarter.

This is my country; God gave it to me;
I will protect it, Ever keep it free.
Small towns and cities rest here in the sun,
Filled with our laughter. Thy will be done.

Roll On, Columbia, Roll On
Written by Woody Guthrie 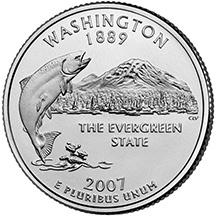